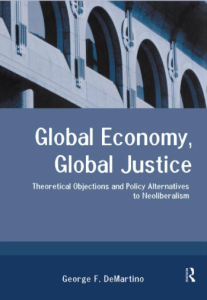 Global Economy, Global Justice explores the vital question: “What makes for a good economic outcome?” It rejects the normative commitment of neoclassical economic theory to welfarism, and its resulting claim that the global, market-based economy emerging at present represents the highest possible stage of economic development. In place of global neoliberalism the book calls for policies that promote global equality. The author demonstrates that neoclassical economics embraces a range of objectionable assumptions about human nature, society, and science, the exposure of which destroys the ethical foundations of global neoliberalism.

Global Economy, Global Justice explores ethically viable alternatives to welfarism. Drawing on the work of Amartya Sen, it proposes the egalitarian principle of the “global harmonization of capabilities” to guide economics. This principle provides a basis for resisting oppression while respecting cultural diversity. It is put to work to adjudicate contemporary debates about global policy regimes, and the book ends with a set of deeply egalitarian global policies for the year 2025.

“This is an extraordinarily creative and comprehensive book. It traces the theoretical roots of the current widespread celebration of the market, offers an alternative perspective that can far better serve the campaign for global justice, and provides a series of concrete policy reforms to promote global equality. Any one of these accomplishments is significant and much needed. Together, they offer a masterful synthesis as well as a provocative call to action one that must be heeded by proponents and critics of neoliberalism alike.” –Julie Graham, Professor, University of Massachusetts

“George De Martino has written a fantastic book! It is simply the best available analysis of the neo-liberal package of ideas, which have so far guided (and deformed) globalization. By offering lucid criticism and alternatives, De Martino also offers readers an excellent perspective on global economic reform.” –Richard Falk, Albert G. Milbank Professor of International Law and Practice, Princeton University

“When all the hype surrounding globalization finally settles down, it is books like Global Economy, Global Justice that will prove most influential. DeMartino has put the phenomenon of globalization in philosophical and political perspective, without presuming that his own views are value free. The book also provides some creative solutions to the ethical dilemmas raised by globalization. I strongly recommend Global Economy, Global Justice for anyone seeking a balanced perspective on the rapid changes occurring in the world economy today.” –William Milberg, Chair, Department of Economics, New School for Social Research